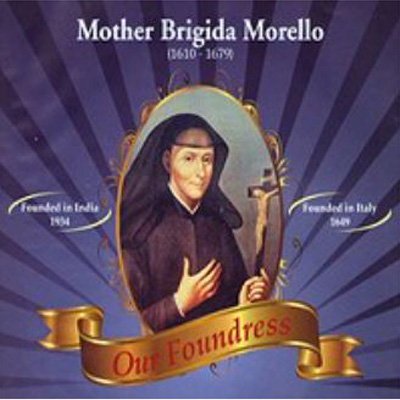 Blessed Brigida Morello of Jesus Foundress of the Congregation of the Ursulines of Mary Immaculate was born on 10th June 1610, in the little sea-side town of Rapallo, Italy. Her parents Nicolo Morello and Lavinia Borzese were noted for their goodness and prudence and were highly esteemed by the town people. Born in a deeply pious family, Brigida grew up and bloomed in an atmosphere of religious virtues and prayer. Brigida was brought up in the family of her paternal grand-uncle who was pious and devoted and had no children of their own.
She was a mystic of Seventeenth century, endowed with high degree of contemplation, prophecy, and miracles. Brigida responded to the need of the hour. “Love of God and neighbor “was her motto. For the realization this, her ideal. She began her life of dedication and service and founded the Congregation of the Ursulines of Mary Immaculate (UMI) at Piacenza, Italy on 17th February 1649 with the specific aim of educating young girls. On 3rd Sept 1679 (Sunday) at 3 a.m. she commended her soul to God at the age of 69.
Mother Brigida Morello was Beatified on 15th March 1998 by Pope John Paul II

After about three centuries later, in 1934 the Missionary flame was kindled in India by a brave band of Five heroic Italian women , the pioneers who came to dedicate themselves in the service of others in this distant land. Since then, hundreds of dedicated virgins follow her examples and live their lives in the service of God and fellow men and women by means of various activities such as education, Nursing the sick, Ministering to the old and dying, caring for the women, children, destitute and the marginalized. Today the congregation has 90 branches in different parts of India alone. This abode of wisdom began in Aluva in the year 1993.